The food diary is complete and I am suddenly aware of just how much red meat and pasta we eat as a family!  But I will let the Nutritionist be the judge of what’s good and what’s bad…

…Chris and I went to the first appointment together as I wanted him to understand from someone else who is a ‘food/nutrition professional’ that he can’t live on sausage rolls, crisps and biscuits!  The first meeting lasted an hour and the lady we saw was very knowledgeable and helpful about what changes we should make to improve Chris’s diet.

The key changes she suggested were:

This is an effective way of checking whether you have the right levels of zinc, calcium, selenium, potassium, chromium, niacin, thiamine… the list goes on, in your body.  It shows how well the body is functioning on an intracellular level without requiring invasive medical tests – through simple testing of your hair.

Measuring the mineral content of your hair apparently gives a wealth of information about your levels of key nutrients and their ratios and whether you are unknowingly storing harmful substances in your body.

It is a simple test to do – we just have to send off a sample of Chris’s hair and wait for the lab results to come back.  This seems a good idea as it will tell us whether anything is missing or out of balance in his minerals and then we can use supplements and diet to make any necessary adjustments.

The hair test our nutritionist recommended is £59 so we are going to do it…now I just have to collect the hair sample from around the base of his skull and neckline and send it off!

This was my first question to the physio we saw about Chris’s shoulder pain.  She advised us that he had Scoliosis – and I had never heard of it!  I now know a huge amount more than I did on that first day and this is what I have learned.

Scoliosis means lateral curvature and twisting of the spine.  The spine develops into a curved shape – typically an S or C shape.  As the spine curves to the side, so the individual vertebrae twist and rotate and because the ribs are attached to the vertebrae, this causes a ‘hump’ or ‘rib hump’ on one side of the back.

It also causes the shoulders to become uneven, with one shoulder appearing higher than the other, or one shoulder blade sticking out further from the back – something the physio called ‘Winging’.  The waist is also typically uneven, curved on one side and straight on the other.

This image shows my son’s spine when he was first diagnosed.  He has what is called AIS – Adolescent Idiopathic Scoliosis.  This simply means that the Scoliosis developed during his adolescent years and the cause is unknown (idiopathic).

About 80-90% of Scoliosis cases fall into this category.  It is then split further depending on the age at which the Scoliosis develops.

Scoliosis is also more common in girls than boys and it is estimated that about 20 in every 1,000 young people will develop a Scoliosis.  I was shocked by this figure – that’s 10 in every 500, or 1 in every 50.  And yet the majority of people I speak to, like me, have never heard of it.

The real difficulty I have discovered with Scoliosis is that no two cases are ever the same.  There are such a wide variety of types depending on the following variables:

With Scoliosis the muscles are strong and well developed on one side of the spine, but weak and under used on the other.  This is what starts the asymmetry of the spine and over time the strong muscles become stronger and the weak muscles weaker.  With the right exercises you can teach those strong, dominant muscles to reduce their work load and allow the weaker muscles to engage and strengthen restoring balance on either side of the spine.  In effect you have to re-educate your muscles, encouraging the weaker side to work harder as the strong side does less.

My next area of research is on whether diet has any effect on Scoliosis.  I believe it must have – particularly when dealing with a child or teen who is still growing.  One of the first books I read focused on diet as a key factor in Scoliosis: Your Plan for Natural Scoliosis Prevention and Treatment by Dr Kevin Lau.  He spends several chapters explaining the importance of diet in the prevention and treatment of Scoliosis.  I’m not going to attempt to summarise it here other than to say I now share his view that diet is important. 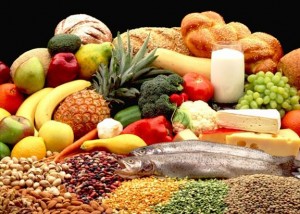 growth.  With this in mind I have decided to contact a Nutritionist and find out whether they think they can help in any way.  We are lucky to have an excellent centre for complementary medicine near to our home and they have a Nutritionist there…

…OK phone call done and appointment made.  She is sending me a health questionnaire to complete about Chris and we have to keep a food diary for a week before we meet her.  That should be really interesting as he will have to own up to all the sweets/crisps/chocolate etc he eats at school or walking home from the bus!  And I am going to have to look at what meals I am feeding him at home.

After the appointment with the consultant I spent the next week attached to my laptop reading and researching everything I could find on Adolescent Idiopathic Scoliosis.  My husband and wider family were incredibly supportive and we all agreed that to do nothing was crazy and that some form of exercise therapy had to help.  On Day 1 of my research I found the website for the Scoliosis Association UK.  (www.sauk.org.uk)  This was a huge help and I quickly signed up to become a member which allowed me to access the website Forum.  I also called and spoke to one of their advisors who was really kind and helpful.  She gave me the contact details of parents like me with adolescent children who had Scoliosis so that I could speak to them and find out what they were doing.

I read the Forum posts daily and cried so many times as I read comments from parents whose children had significant curves and were facing imminent surgery.  Their fear and concerns for their child were heart breaking and I felt that I was incredibly lucky and that I had a real chance to make a difference for my son.  He’s young and he has a minor curve at present and that is our window of opportunity.

I also looked on Amazon and found a very interesting book: Your Plan for Natural Scoliosis Prevention and Treatment by Dr Kevin Lau.  This was quickly ordered and once it arrived I read it in two sittings!  Dr Lau also firmly recommended a specific course of exercises and also stressed the importance of nutrition – I’ll cover that in more detail in a later blog.

The more I learned about Scoliosis through Google the more one treatment kept coming up.  It was “The Schroth Method” – a three dimensional treatment for Scoliosis developed in the 1920’s by a German lady, Katharina Schroth, to improve her own Scoliosis.  See www.schrothmethod.com  By the 1960s, the Schroth Method had become the standard non-surgical treatment for scoliosis in Germany.  In fact, Schroth treatment is currently supported in Germany by the federal health insurance system, and German orthopaedic surgeons routinely refer patients for Schroth scoliosis exercise therapy.

I went back onto the SAUK forum and began to look for postings about Schroth and discovered a number of positive comments from a lady called Liz.  I contacted her first by email and then asked if I could call her and talk in more detail.  Liz has now become a great friend and ally in our battle with Scoliosis.  She has the condition herself and knows first-hand what a difference Schroth exercises can make.

My first phone call with Liz was a pivotal turning point for me and my husband.  We took the decision then that we would not sit around and “wait and see” as the consultant had suggested.  We would take positive steps to work against curve progression.  A relatively easy decision for us, but not so easy for our son as he’s the one who would have to do the exercises!