I was awake for a large part of the night worrying about today and how it would go.  I knew Chris did not want to have to do it all again.  Then inspiration struck me.  It would be much easier for Chris if his dad and me got more involved in the exercises by trying to do them ourselves.  This would let us see first hand just how hard they are and it would give Chris the opportunity to see which muscles we were trying to engage and how the spine moved when we got it right.

I also introduced a good old fashioned reward system, offering him a piece of chocolate 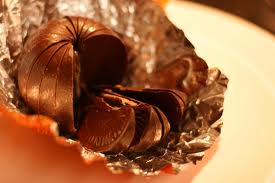 orange each time he got an exercise right!  This approach made a big difference to the second day.  For a start I really understood how hard some of the exercises were and Chris got to laugh at me trying and failing to hang from the wall bars!  His dad had a go at the exercises too and he also realised just what it was we were asking Chris to do.

We carried on with the note taking and photographs until we had reviewed all the exercises we learnt yesterday.  Debs also taught us some good stretches for Chris’s pectoral muscles which are particularly tight and she suggested we see a physio to work on these and stretch them out. Then we let Chris go and relax in another room while we went through the notes and photos and put together an exercise schedule.

Once we were happy that we understood it all Debs said she would go.  We thanked her for her incredible efforts over the last two days and I just had to give her a big hug when we said goodbye.  She has given me such hope and conviction that we can make a positive difference to Chris’s curve – so much better than the “wait and see” advice we got from the consultant.

Today was the day we met Deborah Turnbull, a Schroth trained physio who will visit you in your own home and develop a personalised exercise routine to suit your curve and your lifestyle.

Our day started just after 9am and we finished about 3.30pm.  It was a tough day, particularly for Chris who had put up with a day of being stretched, pulled, poked and prodded as he started to learn the different exercise techniques.

Debs started off by explaining to us what Scoliosis is, how it develops and how the right exercises can help to reduce and control the progression of the curve.  Her knowledge of the subject was amazing, and her absolute conviction that the Schroth Method works was inspiring.

This is Chris at 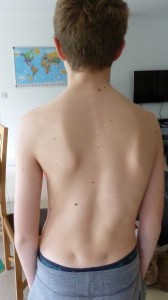 the start of the day, his curve clearly visible.

We then started to learn the exercises.  I say ‘we’ because we were all involved.  Chris had to do the exercises, Steve wrote notes about them and I took photos to show how Chris was engaging different muscles and moving the position of his spine.  This was the most exciting part for me.  In some of the exercises his spine actually moved and sat straight in his back – only for the time he did the exercise, but it demonstrated to me very clearly that when he engages the right muscles in a controlled way his curve reduces.

You can see here how hard his muscles are working and how much straighter his spine looks compared to the image above.

Over time as he develops and strengthens the right muscles it will become harder and harder for his curve to progress…this is the result I was hoping for!

It wasn’t all smiles and excitement though.  The exercises are hard.  They are very precise and they are repetitive.  Not something that appeals to a 13 year old boy.  It was hard for Chris to spend so much time in just a pair of shorts while three adults constantly corrected his position, poking muscles in his back, moving his shoulders and generally demanding he try harder!

Debs also spent time looking at how Chris sat when playing on the PS3, watching TV and eating lunch.  She looked at how he stood, sat at the table at lunch and even what position he sleeps in in bed!  And then she told us it all had to change!  Everything he does whether sitting, standing or sleeping, he automatically falls into his ‘C’ shape curve.  So what we have to do is get him to do everything in the opposite diagonal.  This will help to re-train his muscles out of their curved position.

By about 2.30pm he’d had enough.  I suggested we stop and let him do something else while we adults reviewed what we’d learned during the day.  Debs left about 3.30pm and said she’d be back again tomorrow to see how much Chris had learned and remembered so that he can do the exercises for himself.

I felt incredibly excited by what we had learned but also terribly anxious as to whether we could get Chris to do another day like today…he’d really had enough of it all and I was worried that if we pushed him too hard he’d just say “No – I’m not doing it all again and you can’t make me!”.  I just hope we can get through tomorrow without him wanting to give up – it’s such a lot to expect of a 13 year old.

Now that we have made the decision to work with a Schroth trained physio in our own home we have to get some wall bars fitted – these make it much easier to do the exercises – but they are not essential.  You can work with ‘chin-up’ bars in a doorway.  As we have years of these exercises ahead of us we decided to buy the wall bars and find a place at home to fit them.

There are a variety of options available on the internet and we opted for some full height (ceiling to floor) wooden bars.  We bought ours on the internet from Artimex Sport – www.artimexsport.com for about £200.

They arrived in the most enormous package and we unwrapped them in great excitement.  We had numerous discussions about where to fit the bars and decided we needed to use a strong external wall in the living room.  We started to move furniture and filing cabinets around and then discovered that the wall we had chosen had plaster board fitted.  If we fixed the bars to that the board would deform and we’d end up with massive cracks in the walls (yes, my husband is a bit of a DIY expert!).  So, we moved the filing cabinets back and thought again. 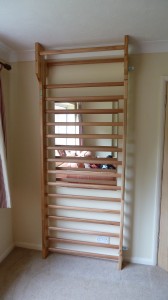 Finally we decided to fix them on the wall behind the living room door.  When the door is open they’re not too visible and when it’s shut there’s room to exercise.  So, out with the drill, tape measure, spirit level and a host of other DIY stuff.  We lifted up the first of the two side frames that hold the bars in place and – oh crap – our ceilings are too low!  Or, the bars are too long.  Either way they weren’t going to fit.  Fortunately Mr DIY also has a collection of saws in the garage so while I made mugs of tea he went out and chopped about 4 inches off each side frame!

After that they went up pretty easily.  We were also advised by Debs to fit a mirror behind the wall bars so that Chris could see himself while doing the exercises.  You can see the finished result here…not a bad job!

According to their website the Schroth Method helps patients to:

Schroth is “a physio-therapeutic treatment system which uses isometric and other exercises to strengthen or lengthen asymmetrical muscles in a scoliotic body” ie you have very specific exercises to bring balance to the muscles in the spine – stretching / lengthening those that have become shortened and shortening those that have become over stretched. The exercises make sense from a structural engineering perspective (my husband’s an engineer and understood it all much faster than me!) and when you see the exercises being done you can understand the requirement to lengthen some muscles, shorten others and overall to rebalance the muscles. Ultimately our long term goal is to make my son’s back muscles work hard as he grows so that the curve is held where it is and cannot progress further.

So the decision to use the Schroth Method has now been made.  The decision as to which therapist to use was much harder.  This is not because there are lots of trained Schroth therapists to choose from working in the UK – believe me there aren’t!  You essentially have two options and neither of them is cheap and neither is currently available on the NHS.  I say ‘currently’ as I live in hope that perhaps one day in the future this treatment may be more widely available.

There are a limited number of clinics in the UK offering an intensive 3 or 4 week programme of Schroth therapy.  They usually require attendance for 6 hours a day, 5 days a week.  Some offer just 4 week courses.  Some offer a split approach of 2 weeks, then a break and then the final 2 weeks.  The results they show on their websites are impressive and I know from one mother I have spoken to that her daughter grew 5cm in height after attending a four week course.  This family now has wall bars fitted in their living room and her daughter exercises every day.

Option 2: Work with a Schroth Practitioner in your own home:

This is the option that we have chosen, working at home for 2 intensive days with a lady called Deborah Turnbull.  For me the great advantage of this approach is that Debs is able to assess your child in their home environment looking at how they watch TV, eat dinner, lie on a sofa, sleep in bed and much more.  And she has advised that it is correcting their posture at these times that is so important.  After all, the average teenager spends 9 hours a day in bed and more at the weekends if you let them!!

She will evaluate Chris and then develop a tailor-made set of exercises to suit his curve.

You can find out more about Deborah Turnbull on her website: www.scoliosisuk.co.uk