Today we returned to Cambridge for a follow-up appointment with Mr Conlan.  Before we saw him Chris had another set of x-rays taken and then we waited for our turn with Mr Conlan.  He checked the x-rays and said that everything was where it should be and looking good.  He also examined Chris again and was very pleased with how he was now standing – tall and straight.  He even used a plumb-line on Chris’ back to see how straight it was!

We also saw Sally again – the really lovely nurse who looked after Chris immediately post surgery and she took him off to see how tall he was…he is now 2 inches taller than he was in December before the surgery…just amazing!

We also asked Mr Conlan’s advice about whether Chris could go on a training weekend for his expedition which is taking place in the Lake District in March.  He had no problem with Chris going from a medical point of view, but did suggest that Chris try sleeping out in the garden to see whether it was too uncomfortable for his back, or whether he felt ok.  He also said that it was too soon for Chris to be carrying a full kit ruck sack and that he should only carry a ‘day’ sack.   We will have to discuss this with the school and see what they can do to help Chris.

After seeing Mr Conlan we had an appointment with the lead physiotherapist, Sarah Charlton.  She showed Chris a number of exercises that he needs to do to improve the position of his right shoulder.  It is rolling forward at the moment so he needs to strengthen the shoulder muscles in his back to pull it back into place.  The exercises were very simple compared to the Schroth exercises that we had been doing so hopefully Chris will be happy to do these every day.

We also discussed when Chris could start to do more exercise and the advice was to avoid PE for the rest of this school year and not to do any form of exercise that requires him to twist or turn and not to take part in any team sports where people might knock into him.

So, another tick in the box!  We will have one more check-up in July before Chris goes on his expedition to Kyrgyzstan and I think the rest is now up to us.  Steve and I will continue to encourage him to do his new exercises and I will also get him out walking with me – might have a battle on my hands over that one though!

My hunch was right and Chris has just completed a full week of school.  He is excused from PE but other than that it is his normal timetable of lessons and he’s been absolutely…FINE!!

The only exception to his normal routine is that I have driven him to and from the bus stop every day as the walk to the bus is about a mile and he didn’t want to do that yet.  But I don’t think it will be long before he can try that.

His teachers have all been very welcoming and treated him just the same as the other kids in his class so that he doesn’t feel any different to them.  And really he’s not any different now, he just has to be careful not to get too tired otherwise his back and shoulders start to ache.

His scar is looking really good now and I have started putting Bio Oil on it every day to try and help the redness to fade but it is a very flat and thin line down his spine.  Once the colour fades I really don’t think people are going to notice it.

So, we are now 7 weeks post op and he’s back in school and enjoying a normal school day.  It seems amazing how fast he has recovered and how relatively easy it has been for him.  He has never complained and is just as chilled and happy as he ever was.  I also feel very different these days and can’t help but smile when I look at him!  We go back to Cambridge in a week to see Mr Conlan and I think he will be delighted with how well Chris is doing.  We also see the physiotherapist who will give Chris an exercise plan to ‘fine tune’ his posture and get him really tall and completely straight. 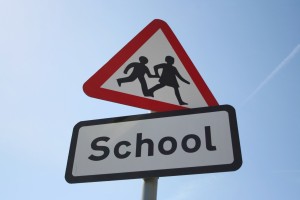 Today Chris went back to school for the first time since his surgery.  He was really excited to be back in his uniform (he needed a new school blazer he’s grown so much!) and keen to see all his friends and catch up on all the gossip.

We agreed that he would start with a half day and I would pick him up after the lunch break so that he could ‘hang out’ with his friends.

He hadn’t told any of his friends that he was coming into school and when he walked into his tutor room he got an amazing welcome and lots of shouts and cheers – I think he was really pleased!  I picked him up as planned and of course asked him how he was feeling…he replied with his usual response – “fine”.  He didn’t find it difficult to be in school and carried his ruck-sack on his back as usual.

So, next week we are going to try a mixture of full days and half days and see how he gets on.  Judging by how he feels today I think it will probably be mostly full days – which I find incredible after just 6 weeks of recovery.

I’ll let you know how next week goes, but it’s all looking really good here…

As we move into week 5 post op I have had some time to reflect a little on our Scoliosis journey and I wanted to share what I feel we have learned.

When Chris was first diagnosed in August 2013 I was horrified by the thought of surgery and scared myself silly looking on the internet to find out about corrective surgery. I vowed that we would do everything in our power to prevent Chris having to go through that and I really believed that Schroth therapy (the specialised form of physiotherapy for Scoliosis) could prevent curve progression.

In fact, I think I pretty much wore blinkers for the first year – pushing Chris to do his exercises twice a day, encouraging him by saying that doing the exercises would hopefully keep his curve under control.  Fortunately neither Steve nor I ever told Chris that the exercises would definitely definitely stop curve progression – we always focused on the fact that they would help balance and strengthen his muscles while he was growing – which hopefully would hold his curve where it was.

Ultimately, his curve did progress and it progressed fast – something that came as a hell of a shock to us all.  But at no point did I feel we had failed.  We had done our very best to support Chris and as time went on it became clear to us that the best thing that we could do for him was to agree to the corrective spinal surgery.

I really struggled to come to terms with it though as it brought back memories of my own upsetting experience of surgery as a five year old child – and hospitals were very different in the way they looked after children then.  I knew Chris would be well looked after and he was also old enough to understand everything himself – indeed the decision to go ahead with the surgery was made by Chris with our support.

And sitting here now, with Chris tall and straight and growing in strength every day, I find myself thinking ‘thank God for the corrective surgery’ that I was so desperate to avoid. We are very lucky that we have these incredible surgeons doing what they do to help children like Chris.  Without surgery his spine would have continued to curve with each successive growth spurt leaving him with a very twisted back and potential longer-term health problems.  I know that no parent wants their child to go through major surgery, but if it is their best option then it should be embraced as the life changing, and I believe for Chris, life enhancing, option that it is.

Finally I want to share what we have learned about exercise and physiotherapy for Scoliosis – it may not prevent curve progression, but it will help your child’s spine to be flexible and their back muscles to be strong.  This makes the surgeons work a little easier because it is simpler to move and re-position a flexible spine than one that is stiff.  And having strong back muscles that are used to being stretched makes recovery much easier for the child.  The surgery moves, stretches and fixes their muscles into new positions and this is what causes a lot of the post operative pain.  If the muscles are flexible they accept their new positions more easily and there is less pain and discomfort for your child.

Chris has recovered at remarkable speed and I think Steve and I can take some small amount of credit for that, thanks to the exercises and stretches we made Chris do in the months leading up to surgery!