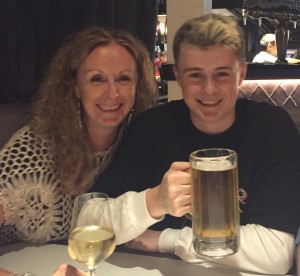 Chris has recently turned 18 and I thought it was a good time to give an update on how he has progressed since his surgery in December 2014.  He is now 6 foot tall with broad, straight shoulders. He has no pain from his back but occasionally his neck feels stiff where the vertebrae were fused to the rods at the top of his spine.

He is a completely normal (!) teenager and enjoys life to the full.  He has worked a weekend job at a garden centre for the last two years and this has been great for developing his shoulders and arms due to all the lifting and carrying required.  He has also learnt a valuable skill – how to be charming even when someone is being rude to you!

He has just completed his A levels and is now on a gap year while he decides what it is that he wants to do.

For us Scoliosis is now forgotten and rarely spoken of.  Chris had a final follow-up with Dr Conlan in February 2017 and we were told his file was now ‘closed’ with no need for further consultations unless he experiences any problems in the future. That was an amazing day for all of us but most of all for Chris who has taken it all in his stride and remained positive and lovely throughout.

I hope this positive update helps those of you who are coping with Scoliosis now and may worry about the future.